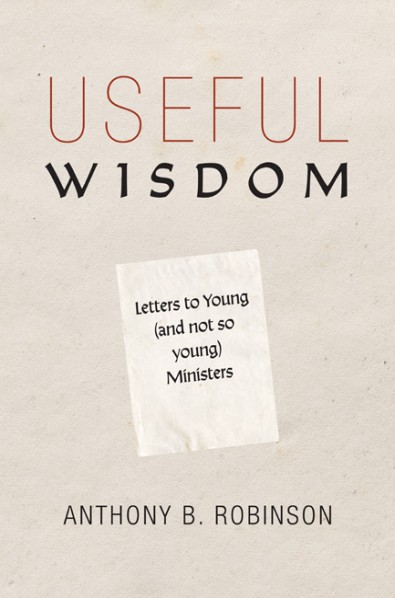 Book Review: “Useful Wisdom: Letters to Young (and Not-so-Young) Ministers” by Anthony B. Robinson, Cascade Books, 2020. (Link to the book at Wipf and Stock here.)

This little book is well-titled, for it is both useful and wise. In the interest of transparency, let me say that I have known Tony Robinson as a friend and interlocutor for decades. During that time, I have admired his many writings, which are clearly and concisely written, and grow out of his pastoral experience and long years as a church consultant. END_OF_DOCUMENT_TOKEN_TO_BE_REPLACED

My friend Tony Robinson, author, speaker, preacher, and peripatetic traveler for the good of the church, is an acute observer of what is going on in our world.

I heartily recommend his website Anthony B. Robinson, and especially the page called “What’s Tony Thinking?”  A few days ago he posted some good thoughts from Peggy Noonan on the Roman Catholic clergy sex abuse story.  He wrote:

“I am becoming a fan of Peggy Noonan’s Saturday columns in the Wall Street Journal. This week she wrote on the Catholic clergy sex abuse troubles concluding by saying, “There are three great groups of victims in this story. The first and most obvious, the children who were abused, who trusted, were preyed upon and bear the burden through life. The second group is the good priests and good nuns, the great leaders of the church in the day to day, who save the poor, teach the immigrant, and literally, save lives. They have been stigmatized when they deserve to be lionized. And the third group is the Catholics in the pews–the heroic Catholics of America and now Europe, the hardy souls who in spite of what has been done to their church are still there, still making parish life possible, who hold high the flag, their faith unshaken. No one thanks those Catholics, sees their heroism, respects their patience and fidelity. The world thinks they are stupid. They are not stupid, and with their prayers they keep the world going, and the old church too.

One might say the same of many “heroic laypeople” in all sorts of congregations and communities of faith amid failures of leadership and scandals and disarray among higher ups. So many good people keep on keeping on in the face of disappointment, deceit and challenge. They are the witnesses to the resurrection.”

That last observation is a particularly wise one, I think.  I can remember sometimes looking out at the congregations I have served after a particularly nasty fight over something ephemeral and wondering, “Why do they even bother to come back every Sunday?  There must be more here than meets the eye.”  And, of course, the answer is that there is!

As somebody once said about Noah’s ark: “If it wasn’t for the storm outside,  one couldn’t stand the stench inside.”   Still, Tony is just right.  These faithful are living witnesses to the resurrection.

With apologies to my friends in the U.K., Down Under, and around the world, I am going to focus on one of our current domestic concerns here in the States.

Because we have a serious problem that is profoundly influencing our national political  discourse. We are plagued here right now with right wing demagogs (we have left wing ones, too, but far fewer and hardly anybody is listening to them) who are spilling their venomous bile by means of Cable TV and Talk-radio.  People like Rush Limbaugh, who are essentially entertainers, have millions of listeners who believe their every pronouncement.

The worst of these fear-mongers tend to be on the Fox Network, which has become the house organ for the very worst impulses of the Republican party. But this is not so much about politics as about the poisoning of any chance of serious adult conversation about important matters facing our country and both parties.

The current bad boy is a clown named Glenn Beck (photo, left), and the only reason I mention him at all (because he is truly worthy of our inattention) is many people believe his nonsense, and he recently advised Christians to leave their churches if they heard any mention of social justice, which I would imagine might be all of them if they are reading the same Bible I am.

My friend Tony Robinson has written insightfully about this on several blogs, where he often gets flamed. I liked this post from Friday so much I am going to post it in its entirety, with his permission. This is from a Seattle on-line site called Crosscut:

What is it about our lives today that this kind of distortion of simple truths about the church, and its commitment to “social justice,” sells so well?

Holding a placard with the trademark hammer and sickle of Communism in one hand, and the swastika of Nazism in the other, Fox News commentator Glenn Beck last week told his listeners that churches that talk about “social justice” are really fronts for Communism and Nazis and they should flee them as fast as they are able.

Beck’s urging of disaffiliation cuts a broad swath in the ecclesiastical landscape, running from the Unitarians to the Catholic Church. In between he would catch mainline Protestants like the United Methodists, Presbyterian Church USA, and United Church of Christ, the Black Church tradition, as well as many Evangelical and Pentecostal congregations.

Whether you look to the Scriptures of the Old or New Testaments or to historic teaching of popes and theologians, a concern for a just society is an unavoidable part of Christian faith and teaching. From the Old Testament prophet Micah, “What does the Lord require of you but to do justice, love kindness, and walk humbly before God,” to Jesus’ preaching, “The Spirit of the Lord is upon me, because he anointed me to bring good news to the poor. He has sent me to proclaim release to the captives and recovery of sight to the blind, to let the oppressed go free, to proclaim the year of the Lord’s favor” — justice is part of the message.

Is social justice the whole message? No, it is but one part of Christianity though certainly an integral one.

Still, Beck’s flamboyant claim that religion fronting a political agenda is a turn-off found confirmation (though not the kind Beck has in mind) in a recent Pew Research study of “Religion Among the Millennials,” (ages 18 – 29). While the majority tends to be believers, this group is disaffiliating from churches. But according to Pew they are not leaving because churches care about social justice; pretty much the opposite. “Youth’s disaffection is largely due to discomfort with religiosity having been tied to conservative politics.” If there’s too much politics in religion, at least the millennials see that as more of a Religious Right issue.

On another recent occasion Beck went after the idea of “community.” Speaking to the Conservative Political Action Conference, Beck claimed that the Founders were against community. Listening to his weird rant, I found myself recalling the eloquent words of John Winthrop [picture: above right], Puritan leader and first governor of the Massachusetts Bay Colony, as he preached aboard ship before landing in the new world.

As the Arabella drew toward land, Winthrop warned that the only way to avoid a figurative shipwreck “and to provide for our posterity is to follow the Counsel of Micah, to do justly, to love kindness, to walk humbly with God, for this end, we must be knit together as one man, we must entertain each other in brotherly Affection, we must be willing to abridge ourselves of our superfluities, for the supply of others necessities . . . we must delight in each other, make others’ Conditions our own, rejoice together, mourn together, labor and suffer together, always having before our eyes our Commission and Community in the work . . .”

One would have to count Winthrop among the founders, I’d think.

So what does the popularity of a person who so distorts both religion and history, as seems to be Glenn Beck’s stock-in-trade, tell us? That this kind of things sells? But that begs the question. What does that tell us? That the long and ugly American tradition of anti-intellectualism and right-wing demagoguery is alive and well? That contemporary Americans are now so ill-informed about history and theology that they will buy this? Or does this suggest some new low-water mark in American culture?

I find it hard to say for sure what the Beck phenomenon tells us. Except possibly this, the anxiety level in America today is very high — orange alert for sure, maybe red. And anxiety, in such large and steady doses, makes us stupid.

(Anthony B. Robinson is an author and teacher who is former senior pastor at Plymouth Congregational Church in Seattle. For the past several years, his column on religion and values appeared in the Seattle Post-Intelligencer.)