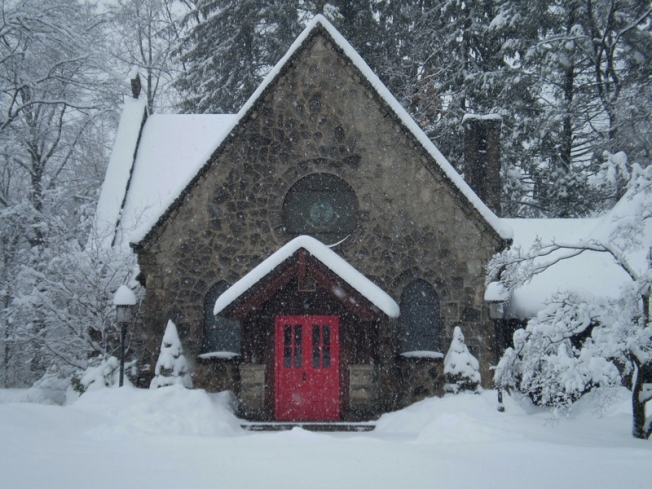 We all have to start out somewhere.

I was reminded of that today when a friend sent me a funny clip about church from Saturday Night Live and I immediately recognized that it had been filmed at the little church I grew up in.

I had seen rumblings about this on the Norwood Facebook page, that there had been a film crew at the Church of The Holy Communion, a beautiful Episcopal church in Norwood, a small town in Bergen County, NJ.

They lived on the Upper West Side when I was born, which is how I came to be baptized at the Cathedral of St John the Divine, which if you’re keeping track of things like this, is the world’s largest Gothic cathedral.

Before I started school we moved to Closter, New Jersey, a little town in Bergen County across the George Washington Bridge from Manhattan. My Dad was a commuter at the time, working downtown as the photo and caption editor for the Religious News Service, the public relations arm of the old National Conference of Christians and Jews.

While in Closter we attended the little church in Norwood, where my brother Bill was baptized, a very early memory of mine. My father, never baptized, was then a grumpy agnostic, and from him I learned to take both faith and doubt very seriously. My mother was devout and active in the church.

We moved to Norwood when I was in fifth grade, and then were within walking distance of our church.

I am sure there was sin, gossip, and the sundry pettiness that plagues every congregation of humans, but I felt loved and accepted there, and the fact that I ultimately became a Christian minister speaks well of their care and nurture for and of me.

The rector was a gentle, ancient man, Mr. (always “Mr.” as he was low church) John Foster Savidge. He had an odd way of speaking that I assumed was some kind of special ecclesiastical patois. Only years later did my Dad tell me he had CP and a resulting speech impediment. He was very kind to me, and one time when I was about 11 he came to call and neither of my parents were home. He treated me with great respect and dignity, and told me about his trips to England. Years later I had my own times living in Oxford and Cambridge.

His successor was The Reverend Robert Maitland, who was ironically more blue collar but also more high church and always “Father” Maitland.

It was under his care that I was confirmed. He was a very down-to-earth guy, much a contrast from the patrician Mr. Savidge.

When I was in high school my mother was diagnosed with colon cancer. In those days cancer was an unmentionable and few adults talked to me about the prospect of her impending death. One was my beloved basketball coach, John Shine, and the other was Father Bob Maitland. He took me to lunch at the Red Coach Inn (any Bergen County folks remember that?). He showed me what a minister could be.

My Mom did die during my first weeks at college at the age of 53. Fr. Maitland presided at the service at the Church of the Holy Communion, to a packed house as only those who die too young can bring out. I was having none of this God who snatched away the most important person in my life.

But years later after a long and arduous faith pilgrimage (which is another story for another day) I came back to the church and to a calling as a minister, although in a different franchise.

So the Church of the Holy Communion remains one of my landmarks, a holy place. And since I always (usually) love SNL the confluence of these two made my day.

The little clip was a trip down memory lane. I took voice lessons from the organist, Walter Witherspoon, and saw the organ near where I stood for my first recital. I saw the lovely stained-glass windows. I wrote recently about the window dedicated to a  Sunday School classmate of mine who died in a sledding accident when I was in the second grade.

It has been years since I have been back there, but I thank God for the place and the people, mostly now in the church triumphant, that were there in my growing-up days.