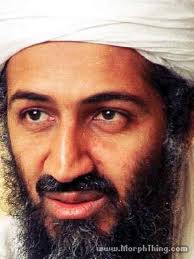 The death of Osama Bin Laden stirred up so many emotions in me I have been having trouble sorting them out.  I recalled the horrors of 9/11, the innocent victims and their families, and some of the same grief and sadness I felt back them flowed over me again.

I also thought of how this one man helped make my country a more fearful place.  I thought of waiting in long TSA lines in airports, and I thought of the shame of Abu Graib and waterboarding, and the two wars we engaged in because of him (one of them quite mistakenly.)  I think of not only those who died on 9/11 but also of the thousands of innocents who subsequently died in Iraq and Afghanistan as victims of war.

And I ruminated that in some very tangible ways Osama Bin Laden succeeded in diminishing my country, at least for a time.

And so, watching the reports of the mission on CNN (as entertainment) was at first thrilling, but later unsettling.  I watched the Mets and Yankees fans chanting USA, USA, and people pouring into the streets to celebrate.

I understood the celebrations, but they also bothered me.  I imagined that the families of the victims were not cheering USA, USA in the streets, because Bin Laden’s death doesn’t bring back their loved ones.

As the various responses to Bin Laden’s death came in I waited for a word from people of faith that might help me.

One of the first was from Presidential aspirant Mike Huckabee, a Baptist pastor, who has obviously not read Rob Bell’s book Love Wins  because he said, “Welcome to hell, Bin Laden!”

That wasn’t helping me any.  I thought the Vatican got it better with this:

“Faced with the death of a man, a Christian never rejoices, but reflects on the serious responsibility of each and every one of us before God and before man, and hopes and commits himself so that no event be an opportunity for further growth of hatred, but for peace.”  (Mutatis mutandis, the Vatican missed the memo on inclusive language.)

I was convicted by the statement that “a Christian never rejoices.”  Since there were thousands of Christians celebrating in the streets at that very minute I understood that the Vatican’s statement was prescriptive and not descriptive.  And so I long for a day when that is true of all of us, Christians, Muslims, Jews and all others, when we rejoice in the death of no one.

So it is the rejoicing that troubles me.  The death of this man who attacked us and killed so many innocent victims is not the primary issue for me; it’s the excessive celebration (and unbridled patriotism) that unsettles me.

I pray for a more peaceful world, one where the hatred that fueled Bin Laden (and often the response to him) will melt away, and no more innocent victims need die and none need to be afraid.

Am I glad he is dead?  In the end my own position is close to what Clarence Darrow expressed when he said:  “I’ve never wished a man dead, but I have read some obituaries with great pleasure.”