I was ordained to the Ministry of Word and Sacrament forty years ago today. Over the years I have ruminated on this blog about my ordination. Here are bits of two of my favorites. This first one is from 2009, but I’ve changed the dates as needed:

I was ordained to the Christian ministry on this day in 1975 at the Newton Highlands Congregational Church (UCC) in Newton Highlands, Massachusetts, by the Metropolitan Boston Association of the United Church of Christ. Dudne Breeze, the pastor, preached the sermon, and a good one it was. Jerry Handspicker, my teacher at Andover Newton Theological School and the associate pastor, offered the ordaining prayer, which asked God to endow me with all manner of things for my ministry, and he seemed in deadly earnest. After forty years I now understand why. Jerry, ironically, also presided at the service of thanksgiving for my ministry when I retired 10 years ago, so he book-ended my three decades of active ministry.

At the ordination we sang “Holy, holy, holy,” and “Be Thou My Vision.” My then girlfriend, now wife, Martha, made me a handsome set of liturgical stoles. Good food was served. There were probably grape leaves.

There were no tongues of fire or other obvious signs and wonders, although the whole event was wondrous to me, and when the clergy laid their hands on me I felt an enormous weight, a feeling about ordination that has never entirely left me.

I got to my first parish in rural Maine and realized soon enough that I didn’t know what I was doing, and that feeling has never entirely left me either. My first congregations (I had two) taught me how to be a minister every bit as much as seminary, and I will always be grateful to them. God blessed me throughout my ministry with wonderful saints of the church who encouraged and sustained me, and put up with me even when I was acting like a damn fool.

Early in my ministry I refused all honoraria, and thereby offended nearly everyone that offered me one. I was shopping for clothes the week before my wedding, and the good Roman Catholic salesman at the haberdashery rang me up with a ten percent clergy discount. I tried to explain all the high-minded reasons I couldn’t accept it and watched his face fall. I called my mentor Fred Robie, the sage of Sanford, who simply said, “My Daddy taught me that when someone gives you something, you say ‘thank you.’” Lesson learned. Would that everything I needed to learn was that simple.

What else did I learn?

Like everyone else I had my good days and my bad days. And like any moderately self-aware person who prays I know my failings better than anyone except God (and perhaps Martha). But I learned it really is all about grace. I am proud (in a good way) to have been a minister.

This second one is excerpted from a post in 2009: 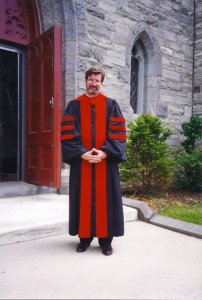 Being a minister of the church is a living conundrum, as Karl Barth describes it so well in his section on “the Task of Ministry”: “As ministers we ought to speak of God. We are human, however, and so cannot speak of God. We ought therefore to recognize both our obligation and our inability and by that very recognition give God the glory. This is our perplexity. The rest of our task fades into insignificance in comparison’ (The Word of God and the Word of Man, p. 186).

Where prose fails to capture this paradox poetry frequently does better.

I have often turned to the poetry of my friend Arnold Kenseth, who died in 2003, especially the collection of poems he entitled  Reflections of an Unprofitable Servant. Here’s one of my favorites:

I was anointed. A fire. Yes, I tell you.
An adazzle. His rare thump numbed me, awed
Me down to size and up to Him. Prayed, pawed
By the laying on of hands, myself anew
And aloft; I became lion to roar Him,
Eagle to lift Him, donkey to bear Him. I,
In that sunburst, languaged with seraphim,
Promised myself to be (Ha!) His emissary.
I did not, friends, manage much. True, I found
Fluency, but not roar. I have been sparrow;
And though jackass as most, I could not be least
Even for Him.
He was scarlet and vast
And radiant and restful. He sang such sound
I heard the earth unloose itself from sorrow.

6 thoughts on “I was ordained forty years ago today”