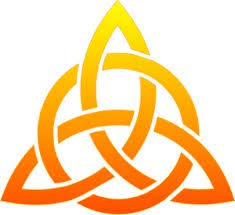 I come from a small family. My father was an only child and my mother had one sister. I never had a cousin. When I was a kid I had cousin envy.

My mother’s older sister, my aunt Grace, outlived my mother by forty years. My mother died at 53 when I was 18, and Grace lived to be 93. She never had any children, so my siblings and I were like her children.

She was a devout Christian, an active Presbyterian (but we won’t hold that against her), and was very proud that her nephew was a minister. Sometimes too proud! So much so that I had to watch her caregivers in the nursing center roll their eyes when she introduced me as “my nephew the minister.” They had all met me many times, but she was a little forgetful in her later years, although still pretty sharp when she died at the age of 93.

She liked to ask me theological questions. One day she said, “I don’t understand the Trinity!” I wanted to say, “You are in good company,” but since I am the family representative on things theological, I did the best I could to help her out.

She said, “I have always prayed to the Father, but my minister said we can pray to any of the persons of the Trinity, because they are all God. She said, “I understand the Father, the creator of all things, and I understand Jesus, but I am not sure about the HolySpirit. What exactly is it?”

“The first thing to remember,” I said, “is the Holy Spirit isn’t an it, but a he. And a good argument can be made that the Spirit is a she, since the word for spirit in Hebrew, ruach, and Greek, pnuema, are both feminine nouns.” Not to mention the intriguing character of Dame Wisdom who was with God at the beginning of Creation, as in the Prologue of Proverbs we heard today. So, he or she, but never it.

My Aunt Grace chuckled. I continued. The Holy Spirit is not an it, because God is personal, and God’s Spirit is personal, too. The Spirit is invisible, but not impersonal. It is not “the Force,” like in StarWars.

I suggested to my aunt that she might think of the Trinity the way I imagine the earliest Christians did. Their God was the God of Israel, the one God, creator of heaven and earth, the God of their Ancestors, Abraham, Isaac and Jacob. Jesus talked about this God, and called him “Father.” In fact, the word Jesus used in Aramaic, Abba, was a diminutive, more like Daddy than the more formal Father. It implied intimacy and affection.

After Jesus’ death and resurrection, the church thought more and more of God the Father and Jesus as sharing an identity, so much so that they called them both by the name previously reserved for the Father, “Lord,” which just also happened to be the title given to the Roman Emperor Caesar. Calling Jesus “Lord” in those times was a political act, and could get you in trouble and become lion’s food in the Coliseum.

The church began to think of Jesus as God’s human representative. Or to put it another way, Jesus was the human face of God. God in person, we might say. In time the church developed the doctrine of the incarnation. As First Corinthians 5:19 says, “God was in Christ reconciling the world to himself.” So, that helps understand the relationship between the Father and Jesus.

This points to what the church fathers referred to as “the mutual indwelling” of the three persons. It’s been described as a dance, like a contra dance, where the dance is bigger than the dancers, but each dancer maintains a strict identity. Keeping in mind that most all human analogies for the Trinity end up as heresy.

If we think of Jesus as God “in person,” the human face of God, then we might think of the Spirit as “God present.” It is the Holy Spirit that makes Jesus our contemporary and not just an inspiring dead man from long ago. It is God’s Spirit that allows us to know his presence and power now. That means the God we worship is alive and still acting and speaking and not just a deity we have heard reports about from the past.

My aunt’s minister was right, “You can pray to any person of the Trinity because they are all God.” When my aunt said she prayed to the Father, she was reflecting the most typical way Christians have prayed, and the way Jesus taught his disciples to pray in the Lord’s Prayer.

The most often used form in worship is to pray to the Father, through the Son, in the Holy Spirit.” I like that.

But that is not the only way Christians can pray. There are other prayers in the Bible that address the other persons of the Trinity, can you think of any? How about: “Come, Lord Jesus,” and “Come, Holy Spirit, come,” prayers to the second and third person.

So, it is no accident that I speak of prayer and worship when I talk about the Trinity, because that is the context in which it makes the most sense. It was in worship that the earliest Christians understood God in three modes of being. They worshiped the God of Israel and remembered Jesus and experienced his presence through the Holy Spirit. And yet they knew that this was not three different Gods, but the one God in three modes of being, each separate, but sharing the unity of the Godhead.

This Triune God is a God who still comes among his people in presence and power. This God still speaks, and that is a good thing, too, because the way the world is continues to challenge us to hear what God would say to us.

The Bible is our authoritative text, but it is only the living God who can turn the dead letter into a live word to us. That puts upon the church the responsibility of being a community of discernment and imagination.

I think of a sermon as an act of religious imagination in which the text of Scripture is put in conversation with the context of our contemporary world and our lives.

Think about this for a minute. The Bible knew nothing of greenhouse gasses and partial-term abortions. It knew nothing of SUVs or 401ks, nothing of computer chips or video games, nothing of airplanes or auto­ mobiles, much less of space travel, of FaceBook, Instagram and Twitter.

So, it is not just enough to say, “the Bible says,” because there is a lot it doesn’t say. And some of what it does say we have to reject, such polygamy, child sacrifice, and stoning adulterers to pick just a couple of examples( Not to mention no lobster rolls or pulled pork.)

Nonetheless, the Bible is a reliable guide for faith, because it tells us enough of who God is and what God does for us to discern what God says to us today. God has given us reason to think things through and a conscience to sort the good from the bad.

We have to listen carefully to what God might say to us in these days from what we do know. And the Bible does tell us about many things. It tells us about mercy and forgiveness, about love and justice, about wealth and poverty, about faithfulness and discipleship, about stewardship and mission, about wisdom and folly, about life and death.

And if we live as long as my aunt Grace, and listen to the God who still speaks, and follow his Son Jesus, and attend to God’s living Spirit, we just may live as good and full and faithful life as she did.  And that would be a good thing. Amen.

(I preached this sermon at the United Congregational Church of Little Compton, RI on June 16, 2019. To listen to an audio podcast of it go here.