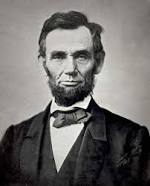 The Internet is full of kudos for the late great Robin Williams, many of them referencing the Walt Whitman poem “O Captain! My Captain!” (which is a line from William’s movie “The Dead Poets’ Society.”)

It would be sad if the original context was lost. The poem is an expression of Whitman’s grief at the death of Abraham Lincoln. It is one of my favorite poems, and as much as I loved Robin Williams, and appreciate his cometic gifts and obvious humanity, I  want us to hold on to the power of this poem about the man that emancipated slavery, saved the union, and changed our nation forever. And I imagine that Robin Williams would be first in line to agree with me.

O Captain! my Captain! our fearful trip is done,
The ship has weather’d every rack, the prize we sought is won,
The port is near, the bells I hear, the people all exulting,
While follow eyes the steady keel, the vessel grim and daring;
But O heart! heart! heart!
O the bleeding drops of red,
Where on the deck my Captain lies,
Fallen cold and dead.

O Captain! my Captain! rise up and hear the bells;
Rise up—for you the flag is flung—for you the bugle trills,
For you bouquets and ribbon’d wreaths—for you the shores a-crowding,
For you they call, the swaying mass, their eager faces turning;
Here Captain! dear father!
This arm beneath your head!
It is some dream that on the deck,
You’ve fallen cold and dead.

My Captain does not answer, his lips are pale and still,
My father does not feel my arm, he has no pulse nor will,
The ship is anchor’d safe and sound, its voyage closed and done,
From fearful trip the victor ship comes in with object won;
Exult O shores, and ring O bells!
But I with mournful tread,
Walk the deck my Captain lies,
Fallen cold and dead.