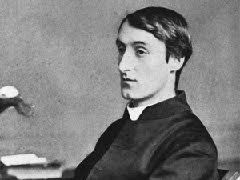 Hopkins is one of my favorites. When I was at Oxford in 1989 there was a display of his original poems and notes for poems at Christchurch College where I was taking a lecture. I loved to go and look at these strange and wondrous scribblings with Hopkins’ own unique pointing and punctuation. Hopkins’ verse often discerns the grandeur of God in the commonplace. Here is one of my (many) favorites:

As kingfishers catch fire, dragonflies draw flame;
As tumbled over rim in roundly wells
Stones ring; like each tucked string tells, each hung bell’s
Bow swung finds tongue to fling out broad its name;
Each mortal thing does one thing and the same:
Deals out that being indoors each one dwells;
Selves—goes itself; myself it speaks and spells,
Crying What I do is for me: for that I came.
I say more: the just man justices;
Keeps grace: that keeps all his goings graces;
Acts in God’s eye what in God’s eye he is—
Christ. For Christ plays in ten thousand places,
Lovely in limbs, and lovely in eyes not his
To the Father through the features of men’s faces.

One thought on “Gerard Manley Hopkins: Poet of A Vast Incarnation”