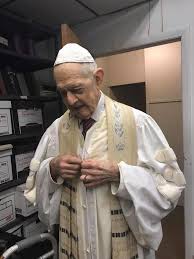 I’m Rick Floyd, a friend and clergy colleague of Rabbi Harold Salzmann. I am Pastor Emeritus of the First Church of Christ in Pittsfield down in Park Square.

I moved to Pittsfield in 1982 to be the pastor of the First Church. Harold had recently retired as rabbi here, and a few months after I arrived my friend Rabbi Alan Berg arrived to be the new rabbi.

My family and I have had a close association with the Temple. We lived across the street for 23 years. My son, Andrew, and my daughter, Rebecca, went to the Kid’s Pre-School here, under the capable watch of Lynn Denmark and Nancy Gagnon. I just saw Nancy before the service. My kids knew the Jewish Holidays before they knew their own. They began their education right here in this building. It must have been a good influence because my daughter went to Yale Divinity School and is an ordained minister.

I was a young man when I arrived in Pittsfield and Harold became a clergy mentor to me. I was just starting out and he was finishing up, but he taught me many things. He taught me how to do the interfaith thing and the community thing, where you work together with people of all faiths or none for the good of the community.

He was one of the first colleagues to welcome me to the community. Soon, I joined the Pittsfield Rotary Club and sat with Harold every Thursday for lunch for six years.

I also joined the Monday Evening Club where Harold was the Secretary and Treasurer, back then and right up to this year. I have been many times to Harold and Audrey’s home on Ann Drive for Club dinners where I have experienced their generous hospitality. And in the summer they would invite the Club to their cottage on Ashmere Lake for a picnic. We went this summer and Josh brought Harold and Audrey.

The Monday Evening Club was founded in 1869 and Harold became a member in 1955. For decades he put together the schedule, printed up little cards for the members, collected dues, and gave reports. It was in the Club that he met his friend Norman Rockwell.

He and I also took turns giving the blessing before each meal. Members often chose me to pray because mine were shorter. When a member died the other members would attend the funeral. Harold always came to these, and I am glad to see a number of our members are here today.

I never had a better clergy colleague than Rabbi Harold Salzmann. He showed up to everything. He came to ordinations, installations, and retirement celebrations. He taught me what I call “The Ministry of Showing Up.” We once invited Father Robert Drinan, then a United States Congressman, to come speak at my congregation, and I have a treasured photo of Father Drinan, Harold and myself, clergy of three historic faiths.

Harold and I served in leadership to the Central Berkshire Clergy Association. We had an annual dinner and Harold often made the arrangements. Harold also had deep friendships with Pittsfield’s African American community and he was a steadfast defender of civil rights.

If I had to describe Harold in one word that word would be integrity. There’s an important concept in the Bible called sedeq. It is usually translated into English as “righteousness,” but it can also mean wholeness or integrity. It is an attribute of God, and it is also an expectation for God’s people, although people always fall short.

Harold was a man of integrity. Josh has talked about his father’s strength and Ariel has talked about his humility, and I want to share a brief story that shows both Harold’s strength and his humility. Harold told this story to the Monday Evening Club several years ago when one of our members gave a paper about his brother dying in Vietnam. Harold had been an army chaplain, and because of that, he was for many years a firm supporter of the Vietnam War. Those of you who lived through the late 1960’s will recall how polarized the country was, much as it is today. There were massive protests all around the country, families were divided, and so were congregations.

In 1970, when the National Guard opened fire and killed several students who were peacefully protesting the war at Kent State University, Harold had a change of heart, and he changed his mind about the war. And on the next High Holy Days in the fall, when he preached to the biggest congregation of the year, he apologized to them and asked them to forgive him, admitting that he had been wrong about the war. This story brought tears to my eyes at the time and still does today.

Whatever Harold was involved in he was all in, whether it was Rotary, the Monday Evening Club, or Clergy Associations. Later in life he had a stamp collecting class at Kimball Farms. He was always reaching out and helping people.

Finally, on a personal note, I want to say that Harold was very kind and supportive to me during a very difficult time in my life, after I had a catastrophic bicycle accident and had to leave my pulpit because of my disabilities.

I feel so privileged to have known Harold for so many years. As I told Audrey, I loved Harold and he loved me. I give thanks to God for him.