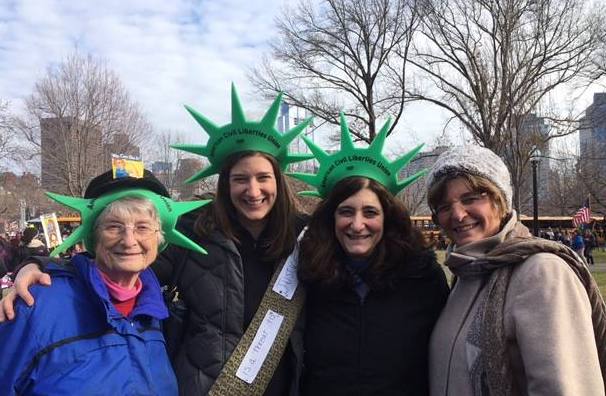 “So let us not grow weary in doing what is right, for we will reap at harvest time, if we do not give up.” —Galatians 6: 9

My mother-in-law is 86. Every day she engages in some form of political protest, such as contacting her representatives by phone or writing them a letter. This is part of her personal faith discipline.

She went to the Women’s March in January on Boston Common and non-violently protested, along with two of her daughters, and my daughter, her granddaughter. They all wore green Lady Liberty foam hats handed out by the ACLU.

It wasn’t her first protest, not by a long shot, and it wasn’t her first time doing it on the Common. About 50 years ago, when my wife was about ten years old, her mother took her out of school to hear Dr. Martin Luther King, Jr. speak at a rally there.

Why does she keep at it year after year? She has her reasons. She was born and raised in Nazi Germany. Her Jewish father, a doctor, was imprisoned at Dachau, and her family was shunned and stigmatized by their neighbors. After the war she was in a displaced person camp before immigrating to the US at the age of 15.

She has seen a nation’s people lose their moral compass and slide into authoritarianism. She knows from early experience that the veneer of civilization is thin and fragile. She knows that freedom and justice are not a permanent state that can be taken for granted.

So day after day she keeps protesting the things she believes are wrong. And she never gives up.

Prayer: God of justice, freedom and peace, lift us up again and again, that we may never grow weary of doing what is right, as we wait in hope for your harvest time.

(This devotion of mine is from “Rise Up! Spirituality for Resistance.”  The devotional is described as “a year’s worth of devotions to keep you burning bright without burning out.” Used by permission. To order a copy go here.)

2 thoughts on ““The Ministry of Not Giving Up””