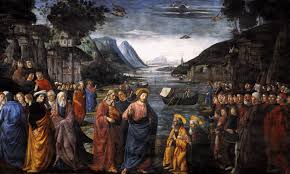 What is vocation? We typically think of vocation as our job or profession, but the idea is much larger and richer than that, so let’s take a look at it, starting with a little word study.

Vox is the Latin word for “voice,” as in Vox Populi, the “voice of people.” The Latin verb “to call” is vocare, as it still is in Italian. The noun form is vocatio.

There is a whole cluster of English words that have these Latin words as their root, words that refer to voice, to speaking and calling. For example, when we “speak out” we are being “vocal.” The whole collection of words we use to speak is our “vocabulary.” And, of course, a person’s calling is his or her “vocation.”

In Christianity (and its mother Judaism) our God is a God who has a voice, a God who speaks and calls.

But God’s speaking is different than our human speaking in an important way. We make a distinction between human speech and action.

But for God there is no such distinction: the Word of God doesn’t just say something, it does something. So, for example, in Genesis 1, God creates the worlds with a word. Recall how God said, “Let, there be light! And there was light.”

And recall also how God says in Isaiah 55, “My word will not return to me empty, but will accomplish that which I purpose.” Isaiah himself is an example of a prophet, a person called by God to speak for Him, so that when the prophet speaks, his words are heard by the people as the Word of God.

But to say that Jesus is “the Word of God” is to say more than that he speaks the Word of God, as Isaiah did or the other prophets did.

No, in Jesus, we see this intimate connection between speech and act, between word and deed. Because Jesus is both the one who speaks the Word of God, and he is also the one who accomplishes it, by his life death, and resurrection.

And so we see in today’s Gospel from John, at the very beginning of Jesus’ ministry, the calling of the first disciples, which sets in motion the drama of the rest of the Gospel.

Why does Jesus call disciples? To answer that we need some background on what Jesus’ ministry was all about. First of all, Jesus comes into a time and place where God was expected. The people had been waiting, longing, hoping for the coming of God’s reign in the form of his anointed one, which is the word “messiah” in Hebrew, and “Christ” in Greek.

The role of John the Baptist in the story is important because many at the time thought that John the Baptist was a figure like Elijah. Elijah was often thought to be the one who would come before the messiah, a forerunner figure.

Many people saw John the Baptist in this same light, and his appearance in the wilderness raised expectations for the coming of the Messiah. When Jesus shows up preaching and teaching many thought he was the expected One.

In our reading today the evangelist describes Andrew and Peter as disciples of John the Baptist, who leave him to follow Jesus.

So Jesus calls disciples for a very particular reason, which is hinted at by his calling twelve of them. This mirrors the twelve tribes of Israel. This is just one of many indications that Jesus understood himself to be the carrier of God’s special calling of Israel.

And what was Israel’s special calling? We get an inkling of it in our Old Testament reading today, where God says to Israel, “I will give you as a light to the nations, that my salvation may reach to the end of the earth.” (Isaiah 49:1-7)

In theological terms we refer to this special calling as “election.” In the Bible election is never for itself. No, election is always to accomplish the purposes of God.

The “chosen people,” whether we are referring to Israel or the church or both, are not called because they are better than others, but because God has use for them. And if we pay careful attention to the stories of the people God calls in scripture, it becomes quite clear that God doesn’t call the qualified, but rather qualifies the called. Think of Abraham and Sarah, well past their prime, Jacob, the liar and thief, Moses, the murderer, and Mary the poor teenage unwed mother. These are people like us and people we know.

So once again, you may be thinking, “Well, that’s really interesting Rick, and we’re glad you got to use your high school Latin, but what’s all this got to do with us?”

And the answer to that is that it has everything to do with our identity as a congregation and our understanding of our mission. In other words, our vocation informs both “who we are” and “what we do.”

I am talking about our vocation as church. We don’t just come to church, we are called to be the church. There’s a difference.

Here’s a hint about our calling. In the Call to Worship for this morning I referenced the UCC Statement of Faith several times. Twice it refers to God’s call. The first call is in the beginning: “God calls the worlds into being.” There’s Genesis 1 again.

The second call from God is through Jesus, “He calls us into his church to accept the cost and joy of discipleship.”

So the church is called as an instrument of God’s purposes, and those purposes are the same as in the original creation.

To begin to think about ourselves that way, as being called for God’s purposes, will change both our identity and mission. We are not merely a voluntary association of individuals with a benevolent and spiritual focus, although we are that.

But we are more than that, we are called, we have a vocation.

This concept of vocation was very important to our Puritan forbearers here in New England. We talked about this in our Men’s Book Group on Wednesday. Before the Reformation vocation was understood to be only for the religious life, for the monk, nun, or priest.

The Reformers changed that. Luther and Calvin believed that there was a general calling to repentance and a godly life for all Christians, and there were particular callings to life’s several vocations, as we understand them today.

So calling was no longer just for the clergy, and it still isn’t. Calling is for us all, and what are we called to be? Disciples of Jesus. And what is a disciple? A disciple is quite simply a follower or a student. One who hears the call of Jesus.

Jesus called those first disciples by asking them, “What are you looking for?” And later he invites them to “Come and see!”

And they might not have known what they were looking for, as many of us do not, but they knew it when they saw it. And they said, “We have seen the Messiah.”

They heard the call and answered it.

I want to talk now about the power of words as it relates to our callings, and I can think of no better example than Martin Luther King, who was a very important influence on me, and on my own call to ministry.

I was fourteen when Dr. King gave his “I Have a Dream Speech” in Washington, D.C. at the Lincoln Memorial. I was there last month and felt as if I was standing on holy ground.

I had grown up in the church, but in Dr. King’s speech I heard a new power in some familiar words. Dr. King’s father was a minister, and Martin grew up in the thought-world and language-world of the church.

The African-American church had retained the moral grammar of the faith that had been largely lost in the mainline church, the language of justice and righteousness, and in the civil rights movement Dr. King and others gave it back to the whole country as a gift in their words.

When I first heard Dr. King’s words they rang true. They had behind them such moral force. His use of familiar scripture, such a Isaiah 40, “Every valley shall be exalted,” and of shared national language such as the words of “My Country ‘tis of Thee” re-awakened the moral imagination of much of the country.

In Dr. King’s speech fifty years ago I became awakened to the power of words to shape the life of individuals and societies, and years later I discerned a call, there’s that word again, a call to the ordained ministry.

And throughout my long ministry I have often pondered the power of words, to heal or hurt, to inspire or dampen the spirit, to free or repress. And I believe that a society that de-values words is at risk, because it ceases to know when it is lying to itself, and can’t recognize truth when it hears it.

I invite you to recall such moments in your own life. Perhaps you were listening to a sermon, or the words to a hymn, or a scripture reading, and suddenly those words were not something you were just overhearing, but words that were addressed to you.

And it is in such moments that “vocation” takes place; when you hear the voice of God calling. And when that happens there is no turning back, because the Word of God has a life of its own in your life.

You know how Brent (our pastor) often begins worship with the words “No matter who you are, or where you are on life’s journey, you’re welcome here.” This language is part of what we in the United Church of Christ call “the extravagant welcome of our God.”

These are good words. The purpose of this welcoming language is to create no barriers that will keep people away from our life together here, and several people have told me how reassuring it is to them.

But, in the interest of full disclosure, I need to tell you there is danger in all this extravagant welcome, and it should come with a warning label.

Because once you say to yourself, “I feel welcome here. This could be my church,” a new thing may happen. You are very likely to have one of those moments I just described, when the words you hear become the Word of God that feel as if they were directly addressed to you. Then you hear the call of God and recognize your vocation. Then you move from attendance to discipleship, from observing Jesus to following him. Then you accept “the cost and joy of discipleship.”

Those moments will change your life.

And let the people say: Amen.

I preached this sermon at my home congregation, the First Congregational Church (UCC) in Stockbridge, Massachusetts on January 19, 2014.

(Picture: The Calling of the Apostles by Ghirlandaio)

2 thoughts on “The Calling of Disciples: A Sermon on Vocation”