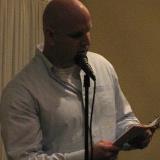 Adam Desnoyers is a wordsmith extraordinaire, a winner of an O’ Henry Award for best short story, a putative novelist, a creative writing professor at the University of Kansas, and a valued part-time employee of  Harbour Lights, a hipster townie/student bar in Lawrence, Kansas. In the interest of the kind of transparency you have come to expect from this blog, I need to admit that Adam is also my nephew and godson.

He writes periodic blurbs for Harbour Lights, which he posts on Facebook. His most recent one is about Thanksgiving, and, since I was with him on Thanksgiving when he wrote it, I can attest that it is (mostly) fictional, though none the less funny for being so. So for all of you who have survived the messy and comical goings-on of your families at Thanksgiving,  enjoy:

No one saw the dog hop up and lick the turkey so you made sure you got a cut from the other side. Aunt Myrtle burned a Virginia Slim hole in the loveseat when the weight of the day had her dozing off. Cousin Dane had been waiting in a Black Friday line since Tuesday; got incarcerated for events occurring somewhere between Hosiery and Electronics. Mikey floated him bail. Bro-in-law Tyler left the linen closet full of dirty diapers and Hot Pocket sleeves. Darlene neglected to mention the weed in the pan of muffins. Hugh emptied your Ativan prescription but left you one because he’s thoughtful. Morgan announced she’s preggers again. Your mother tried really hard. Nobody has seen the cat. You haven’t really lost the weight, mostly you’re just dehydrated. Eddie says during the Rapture you should come to his house, he’s got a year of Hungry Mans and light beer. The athletes left it all on the field. You wonder if you really married the right person. Linda and Frank promise things will be different this time around. Sometimes there’s this tightness in your right lung. You never know if the bright one’s a star or a planet. One place never changes–well, maybe just a little right now, but soon it will stop. HARBOUR LIGHTS.