Reading Elizabeth Strout’s Abide with Me reminded me how fiction can sometimes capture the truth of things better than a factual account, just as a fine painting can sometimes be more truthful than a photograph of the same scene.

I heard Strout speak a few years ago at a Bangor Theological Seminary Convocation, and I knew her book was about a Congregational minister in rural Maine, but I only just got around to reading it.  I’m glad I did.

The resonances for me to my own life are striking.  I am not Tyler Caskey, her protagonist, but I did begin my ministry in a couple of very small rural Maine towns that bear a notable resemblance to the fictional West Annett.  And I left those congregations to become the chaplain at Bangor Seminary, which is the model for Tyler’s alma mater, Brockmorton Theological Seminary (a whimsical reference I am sure to my late former colleague, iconic Bangor New Testament Professor Burton H. Throckmorton.)

Like Tyler I married a Massachusetts gal who came up to live with me in the parsonage to much speculation.  There are many differences to be sure:  I started my ministry in the mid 70’s and Tyler in the late 50’s, but things in small town Maine hadn’t changed all that much.

Strout deftly describes the “wheels within wheels” complexity behind the seemingly simple social life of a small Maine town.  The people of West Annett endure the soul-numbing endless winter, and they are unaware of how they have embraced their dearth of possibilities as a virtue.

Strout takes her time. You know from the first page that some bad things have happened to Tyler Caskey and the denizens of West Annett, but she is no hurry to tell you what they are.  Her storytelling is like peeling an onion, and that in itself captures the rhythm of these small towns, where nothing ever seems to happen on the surface when it is really as busy as an ant farm just below.

Tyler himself is a loveable character, too earnest by half, with his love of Bonhoeffer, his tenderness toward his wounded young daughter, and his quiet faithfulness in his daily round. Strout knows her church, and she knows something of the grandeur and misery of the ministry, as the minister can move in a minute from reading the Cost of Discipleship to hearing tawdry local gossip or the sordid confession of a soured marriage.  Her cast of characters will bring a smile to many a rural parson:  the hostile husband reading the paper in the car in the church parking lot, the loyalist who routinely phones Tyler to warn him what’s up,  several variants of antagonists, and the married woman with a crush on the minister as well as a bone to pick. 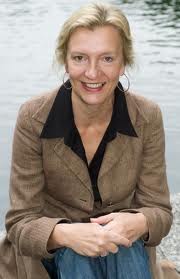 Strout observes her characters with clear eyes, and her depictions at times just miss being cruel. If you care for these flawed people at all it is because of something like grace, since they are not “good” people in the way that real people  generally are not.  Yet in the end, in keeping with its subject matter, this is a story of redemption.  Strout doesn’t clean up the messiness of life, but she knows that the holy rhythm that runs from Good Friday to Easter isn’t confined to ancient Jerusalem.

I don’t want to give too much away.  Read Abide with Me.  It’s the kind of book that when you finish the last page and close the cover you are already missing the characters.