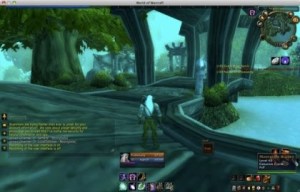 Some days I will bounce around the blogosphere, connecting to interesting posts I see on the Blogrolls of people on my Blogroll (and they say the internet is a time waster!)   I find that there are a lot of interesting blogs by young Christians.  This often makes me feel somewhat fogeyish, but it is also refreshing to get a glimpse into their world and the situations and issues with which they are grappling.

One of the more intriguing posts I have run across recently was by a young Christian on the ominous sounding site Reflections of a Broken Man. He describes how he was playing the popular MMORPG game World of Warcraft and struck up a (typed) conversation with another player.

In the midst of this conversation it comes out that she is having some life scuffles, and he admits he is a Christian. She seems interested and the next thing he knows is he’s witnessing to his Christian faith.

So much of what passes for Evangelism these days is pretty ham-handed and insensitive (“taking prisoners for Christ”), but I was touched by the genuineness and grace of this encounter, as well as the incongruity of it taking place in Moonglade by some guy behind a dopey Night Elf toon (at least that is what it looked like in the picture (above) he posted.)

One thought on “Night Elf witnesses in Moonglade: WOW Evangelism”