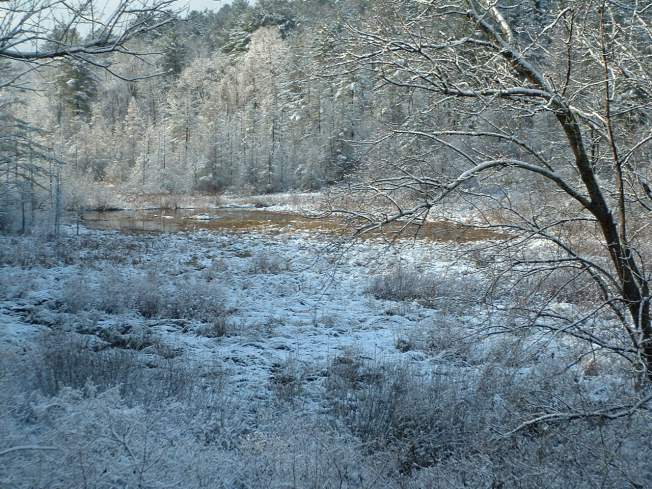 I’d like to thank all of you who have dropped by this blog over the years. It is hard for me to believe a decade has passed since I began it. I started to write again as a personal act of healing which in time morphed into a new chapter of my ministry. END_OF_DOCUMENT_TOKEN_TO_BE_REPLACED 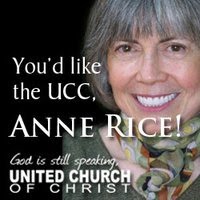 When writer Anne Rice recently said she’s done with church, the UCC Office of Communication in Cleveland started a Facebook page called “You’d like the UCC, Anne Rice.” But I am convinced that they are wrong, and here’s why:

1. We are not the Roman Catholic Church. Yes, we Reformed Christians do believe that we are included in “the one, holy, catholic and apostolic church” of the Creed, but don’t bet the farm that Anne Rice thinks that. When she says she is done with “the Church” she knows just what church she is done with. When Philosopher George Santayana said he didn’t believe in God, he clarified by saying, “And the God I don’t believe in mother’s name is Mary.” Anne isn’t looking for liberal Protestantism.

2. She would love all our social views, but hate our religious ones. Yes, we affirm science and tolerance toward women and gays, and affirm birth control, and other progressive stuff. She would like that. But she would hate our distrust of authority, our shoddy theology, our aversion to dogma, our rejection of the cross, our sloppy liturgies, our tortured language. She would do better to search the database for subscribers to the New York Times or the New Yorker or join a book group.

3. We use grape juice at communion. C’mon.

4. We’re a tiny franchise. The Roman Catholic Church has 1.1 billion members. We have 1.1. million members (about half what we had when I was ordained) and are shrinking fast.

5. We are afraid of the Dark Side. Anne is a writer of Gothic vampire novels. What would she think of our chirpy optimism. How the church of Calvin and the Puritans came to have such a sunny view of human nature is one of those great imponderable mysteries, but Anne would hate it.

6. She would have nothing to push back against. Anne likes to fight with authority, but we don’t have any worth fighting with. She would hate that.

7. She would miss the thick texture of the Roman Church for our trimmed down decaffeinated Protestantism. Think about it: no Veneration of Mary, no stations of the cross, no fasting during Lent, no confession. Anne wouldn’t like it.  She just wouldn’t.

8. Our meeting houses have too much light. Anne is a “Gothic” novelist. Guess what kind of architecture she wants in her place of worship? Trust me on this one.

9. She would hate the New Century Hymnal. Why? Because she’s a writer and respects authorial intent and felicity of language.

10. She might get tired of hearing about how great we are because of our enlightened social views, and actually want some Christianity.

So Anne Rice, who was raised a Roman Catholic, but repudiated it and became a bestselling pop writer about vampires (as everybody knows), later decided that Christianity was, after all, pretty great, and wrote a bestseller in 2008 about her return to the faith. Cool. Everybody is entitled to change her mind. Glad to have you back, Anne.

Not so fast! Now she has decided that Christianity isn’t so great because of all the hateful toxic human stuff that flies under it’s banner, and so she has repudiated it again, which is fine, since we all change our minds from time to time, and God knows she has a point.
But, unlike the rest of us, Anne doesn’t have the luxury of nobody caring what she thinks, so she comes off, at least to me, as fickle and maybe not quite as serious and committed as one would hope.

Then my crowd, the United Church of Christ, which never misses an opportunity to brand itself as the Christian equivalent of the unCola, launches a publicity campaign to say, “Hey Anne, you’d love us, cause we’re cool and don’t hate science, gays and women, and are very welcoming and all (and practically don’t sin, except for our really big self-righteous thing.) So come join us.”

I’m troubled that our faith has became part of a big public relations campaign within the culture of celebrity.  It is true that the Christian brand has been degraded by sinners, but, alas, there is no one else left to represent it.