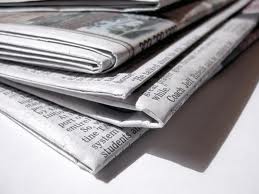 2 thoughts on ““The Future of Newspapers:” The Third Annual Martin Langeveld Interview”