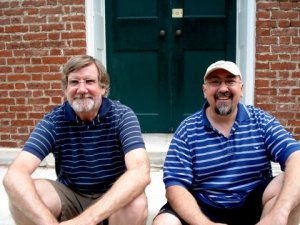 For the last five years or so, I have been in on-line correspondence with Jason Goroncy, a young theologian from Australia who teaches in New Zealand.

What brought us together was a shared interest in P.T. Forsyth, the great British theologian from the turn of the last century.

Jason had a blog entitled the P.T. Forsyth Files that I frequented, where he had posted PDF’s of Forsyth’s main books.  Along the way I noticed the high quality of both the look and the content of the blog, which he renamed Per Crucem Ad Lucem (“from the cross to the light”) after the inscription on Forsyth’s grave in Aberdeen.  Per Crucem Ad Lucem became my favorite blog to visit.

When I first discovered his blog Jason was at St Mary’s College at the University of St Andrews working on his PH.D. on Forsyth.  I knew the place well as my family and I had enjoyed a splendid sabbatical there in the spring of 1995, and while there I worked with Richard Bauckham on the Christian understanding of atonement, in what would become the bulk of my little book When I Survey the Wondrous Cross: Reflections on the Atonement.

So I knew about Jason from his blog, and eventually he knew about me from my book.  He tracked me down via my friend Cliff Anderson, the curator of Reformed Collections at Princeton Theological Seminary, who was a fellow blogger with me at Confessing Christ, a United Church of Christ renewal movement.

Eventually, I offered to read Jason’s dissertation and he accepted my offer, and I spent a good deal of the summer of 2009 doing just that.  You can get to know someone pretty well by a close reading of their dissertation, and Jason and I went back and forth by e-mail almost weekly throughout that summer.

I also started my own personal blog in 2009, Retired Pastor Ruminates, and Jason was gracious in promoting it on his blog and using some of my posts on ministry with his students.

In time I invited him to visit us here in Pittsfield anytime he was nearby. And so it came to pass that this winter he registered for the annual Princeton Karl Barth Conference earlier this month, and I suggested he spend some extra time at one end or the other to see us in the Berkshires.

We gave him a whirl-wind tour of the Berkshires, with some highlights being the Camille Pissaro exhibit at the Clark Museum in Williamstown, and a visit to the First Congregational Church in Stockbridge where Jonathan Edwards was the second pastor. He got to see the Bruins take the Stanley Cup on TV, and see some Red Sox games.  We had a running conversation on theology, ministry, American foreign policy and many other things, mostly in agreement.  After a week my wife joked that we were even dressing alike (see picture), but I assure you that was sheer coincidence.

Jason landed at JFK in New York and got a taste of that great city for a couple of days. We collected him on the commuter train and the next day we left for Boston, where he got to see the sights and had a few hours at the Isabella Stewart Gardiner Museum.  A friend had told him about the amazing Vermeer painting, but sadly had missed the memo that it had been stolen in 1990 and never recovered.

We attended two theological Conferences on Karl Barth, the one in Princeton and one near Boston for pastors sponsored by the Massachusetts Convention of Congregational Ministers.

Blogging is often disparaged as the end of ( fill in the blank) reading, attention spans, the church and/or civilization as we know it.  But these young bloggers, students and pastors, were theologically astute and uncommonly well read.  I have defended blogging before and stand by it.

The internet is no substitute for face to face meetings, but it makes the world a smaller place with a bigger conversation.  Spending time with Jason was enriching for me.  I know more about his part of the world (and especially the church there).  And he knows more about mine.

At one point toward the end of his stay he ruefully suggested that he might have fewer blog posts attacking America, and I replied with a smile that he should keep ’em coming, “just make them better informed.”

Separated by more than two decades in age and thousands of miles in geography (we don’t even live our lives in the same day) Jason and I discovered a common love for Christ and his church, not to mention birdwatching, fishing, fiction, good food, whisky, and even the Boston Red Sox.  It was good.

You can find Jason’s account of his travels in North America here.

One thought on “Meeting an on-line friend in the flesh: my travels with Jason”