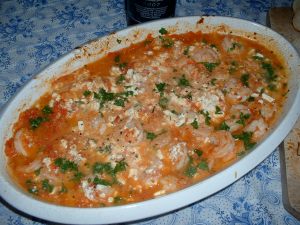 We had something similar to this in the pretty seaside town of Molyvos on the Island of Lesbos back in 2003. Martha’s grandparents emigrated to America from Lesbos, and it was her first time visiting there. It’s a beautiful place.

This summer Andrew and Jess came back from the Greek Islands and reported having a version of it in Santorini, though they claim mine is better, which may just be because there is more of it.This is a tourist dish with no claim to authenticity, but it is yummy. And, once you’ve cleaned the shrimp, easy and pretty foolproof.

I use frozen easy-peel shrimp that come in 2 lb bags. You will need a heavy-bottomed skillet, and an ovenproof serving dish (I use a Le Crueset enameled one, but you could do it any shallow casserole or baking dish.)

Preheat oven to 400 degrees F. Heat the oil in the skillet over medium heat and cook the onion, stirring occasionally until it is soft, about 5 to 10 minutes. Add the garlic and cook for another minute, then add the red pepper flakes and tomatoes, and let it cook for another ten minutes or so until some of the liquid has evaporated and the sauce begins to thicken. Add the shrimp and cook for a few minutes, stirring now and then, until they turn pink and begin to firm up (don’t overcook them).

Turn the mixture into the baking dish, sprinkle the feta over the top, and put it in the oven for 10 minutes until everything is bubbling nicely. Salt and pepper to taste (the feta should be all the salt you need), and sprinkle with the parsley.

Although in Greece this is typically a starter, it will easily feed four people as dinner with some crusty bread and a Greek salad. In the best of all worlds your kids will bring you a white wine back from Santorini to have with it (as mine did), but any sturdy crisp white will go just fine (feta is a tough flavor match for wine.) White Retsina works if you’ve acquired a taste for it, which most people who aren’t Greek haven’t. Enjoy.