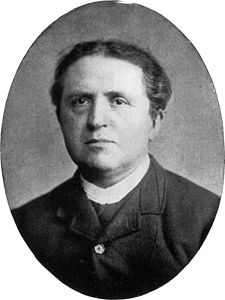 In one of threads on our Confessing Christ internet conversation we recently discussed the role of emotion versus intellect in Christian faith. It was agreed that these are not mutually exclusive domains, but that different figures have put more emphasis on one or the other.

Under the influence of my friend and fellow Confessing Christ blogger Clifford Anderson of the Princeton Theological Seminary Library I’ve started reading Abraham Kuyper (1837-1920). A fascinating figure, Kuyper was a Dutch pastor, theologian, author, editor and politician, who served from 1901 to 1905 as Prime Minister of the Netherlands. He also founded the Free Univeristy of Amsterdam.

Last night I was reading his 1898 Stone Lectures at Princeton, published as Lectures on Calvinism, and I was struck by this passage:

“If everything that is, exists for the sake of God, then it follows that the whole creation must give glory to God. The sun, moon, and stars in the firmament, the birds of the air, the whole of Nature around us, but, above all man himself, who, priestlike, must concentrate to God the whole of creation, and all life thriving in it. And although sin has deadened a large part of creation to the glory of God, the demand,—the ideal, remains unchangeable, that every creature must be immersed in the stream of religion, and end by lying as a religious offering on the altar of the Almighty. A religion confined to feeling or will is therefore unthinkable to the Calvinist. The sacred anointing of the priest of creation must reach down to his beard and to the hem of his garment. His whole being, including all his abilities and powers, must be pervaded by the sensus divinitatis, and how then could he exclude his rational consciousness,— the λογος which is in him, the light of thought which comes from God Himself to irradiate him? To possess his God for the underground world of his feelings, and in the outworks of the exertion of his will, but not in his inner self, in the very center of his consciousness, and thought: to have fixed starting –points for the study of nature and axiomatic strongholds for the practical life, but to have no fixed support in his thoughts about the Creator Himself,—all of this was, for the Calvinist, the very denying of the Eternal Logos.” Lectures on Calvinism, P. 52. Eerdmans, 1931

2 thoughts on “Abraham Kuyper on Glorifying God with your Intellect”