I love food. I love to cook it, and I love to eat it, especially my own.

Mom and Dad both cooked. It wasn’t haut cuisine, but it was pretty healthy and had variety. I was born in 1949 so my earliest days in memory are in the fifties, not a heyday for American cookery. We had our share of frozen potpies and TV dinners and Mrs. Paul’s fish-sticks, but more often it was a home-cooked meal. My mother was a Midwesterner, so it was pretty simple with not a lot of seasoning. But she did have a well-worn copy of M.F.K. Fisher’s “How to Cook a Wolf” on her shelf, which was pretty avant-garde in those days. Fisher, Elizabeth David, and, of course, the incomparable Julia Child, were bringing back dispatches from the front about such exotica as olive oil and fresh garlic.

My favorite food was my mother’s friend chicken, which was a company dish. I remember fat pork roasts you couldn’t buy today for love nor money, with an inch of fat on the outside, and cooked ‘til it was gray for fear of trichinosis. The Sunday roast appeared mysteriously throughout the week in various guises and disguises. My Mom’s pork roast would supply the main ingredient for my Dad’s Pork Chop Suey or Chow Mein. That was exotica in the days before Szechuan and Hunan restaurants, when all American Chinese food was faux Cantonese. We had mac and cheese and ham steaks and haddock (frozen) that Mom would roll in corn meal and fry.

We seldom went out because it was expensive. When we did it was for pizza at an Italian bar called the Antlers (this was North Jersey) or to Westwood to the Cantonese place, where my Dad would always silently issue a “winner take all” challenge to the poor waiter with the water pitcher. Or for a real treat we might get the clam strip roll at Howard Johnson.In those days, at least in my house, there was no extra virgin (or any) olive oil, no kosher salt, no pepper mill (that came ground from Durkees), no fresh garlic, no cilantro, no jalapeno peppers, no garam masala, or Hungarian 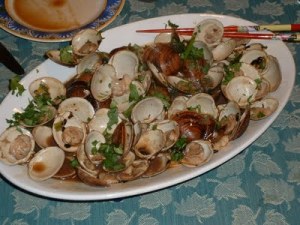 paprika. Cheese was typically Longhorn cheddar. Steak was chuck and cooked gray. Pasta was spaghetti with red sauce from a jar, with some browned ground beef in it.
My parents didn’t drink when we were growing up, so the first wine I recall having was the sweet Portugese rose, Mateus, that was the rage when I was in college.I started cooking when I was a young adult in the years before I married. It started with a simple spaghetti sauce or chili con carne. I added a spinach loaf that was mainly frozen spinach and crumbled Saltines.

When Martha and I were married our friends the Handspicker’s gave us a copy of Fannie Farmer’s Cook Book as a wedding present. That was my first cookbook, and I made my way through it and added more dishes to my repertoire: sauerbraten, shish kabob, and variety of soups, chowders, and stews. Martha gave me Joy of Cooking in our early days and I added still more. We moved to Bangor in 1979 and they didn’t have a decent Chinese rerstaurant, so I went to the Bangor Public Library and found Joyce Chen’s Cookbook and taught myself rudimentary Chinese cooking. There was a little Vietnamese place with a small market, and I found tree ears and tiger lily blossoms to make hot and sour soup.

I discovered other cookbook authors: Julia Child, James Beard, Craig Claiborne, Madhar Jaffrey, and Marion Cunningham. I made tandoori chicken and turkey enchiladas, paella and ratatouille. I discovered wine can be tasty. I still remember Arthur and Anne Perkins coming to dinner and bringing a bottle of Cabernet from Rutherford, and it was

a revelation. In 1980 Martha and I went to Sonoma County to visit my college friend John Kwitkor, who worked for winemaker David Stare at Dry Creek Vineyards. John took us up and down the county, tasting and eating and having a ball.When our children arrived on the scene a few years later they landed in a culinary household far different from the one I grew up in. They ate tofu with scallions in oyster sauce regularly, and curries with raita, which Rebecca called “cucumber white.” When they were four and six we dragged them off to Oxford, England, for a term, and they ate pakoras and samosas, Scotch eggs and Cornish pasties, scones with jam and cucumber sandwiches with no crusts.

On a plane ride back in the days of airline food the flight attendant asked the woman next to my son Andrew, then about age five, which entrée she would like, one of the choices being coq au vin. “What is that?” she asked. “It’s chicken, Mam,” my little guy answered. When my daughter returned from Oxford she started in kindergarten again here in the states, and early in the year the children were all asked to name their favorite food. There was lots of pizza, pasta, and hamburgers represented, but the teacher got a big charge out of Rebecca’s choice: tandoori chicken.

This little culinary autobiography was prompted by Michael Pollan’s piece in the New York Times Magazine last week about food, where he writes about how we are becoming spectators of food rather than makers of it.

I still make food. Every day. I don’t do it to be virtuous, but because I enjoy it. I enjoy making it for others and sharing it with them. As a pastor for thirty years I know the joy of celebrating the sacraments with a community. There is a near-sacramental quality about a meal well-prepared and presented and enjoyed with family and friends. I often take pictures of the foods I make for a “cookbook” that maybe someday will be Christmas presents for my family (the pictures in this blog are all of things I have made).

My parents didn’t make fancy food, but they made good food, and from them I learned the joy of the table, about taking your time, and enjoying your food and the company and the conversation. We all know we need food to live, but I believe we also have a deep hunger for this larger communal experience of which food is just one part, albeit an important one. To me food takes time, thought, and creativity so it becomes something to celebrate and not just to eat.
(Photos from top: Grilled shrimp with uncooked basil tomato sauced pasta; Littleneck clams with black bean sauce; Portuguese Cataplana; Korean BBQ’d Flanken Beef Short Ribs. Photos by R.L. Floyd)